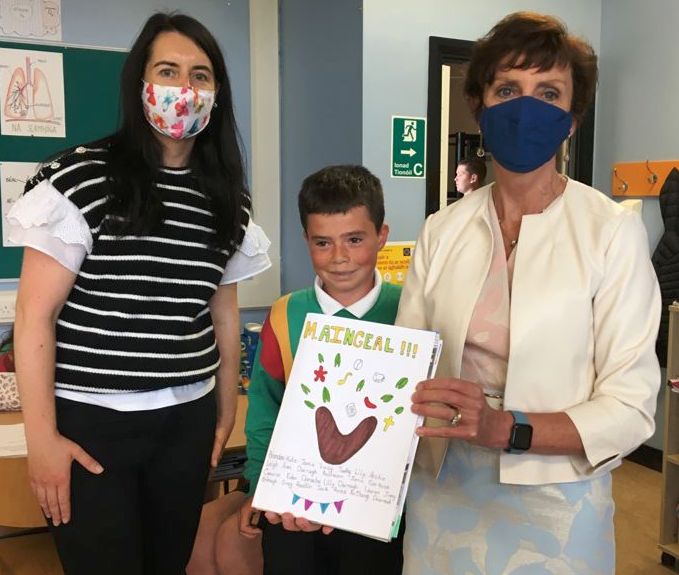 An M. Aingeal spent almost four decades teaching in An Ghaelscoil. She was Principal for fourteen years, taking up the baton from An M. Bríde, founding principal of Gaelscoil Eoghain Uí Thuairisc. An M.Aingeal continued to ensure the holistic development of each child as an individual.

Due to Covid regulations, we couldn’t gather together as a school as we would have wished, but each class came up with their own tributes to An M. Aingeal, through art-work, poems or songs. What shone throughout was the high esteem and affection in which An M. Aingeal is held. The Rang 6 children, via the specially prepared video clips, spoke for every single child in the school and indeed the wider community, when they said “Bhí an t-ádh linn a bheith sa Ghaelscoil agus tusa mar Phríomhoide againn” – “We were fortunate to be in the Gaelscoil with you as our Principal.” The Cairde committee, on behalf of the parents, also made presentations to An M.Aingeal and again, spoke of An M.Aingeal’s dedication to An Ghaelscoil and the interest she showed in each and every child and her vision for the school. 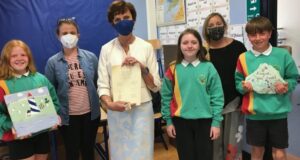 The staff spoke of Aingeal’s door being open to everyone – children, staff, parents, past pupils and visitors alike. They spoke of how Gaelscoil Eoghain Uí Thuairisc had flourished under her guidance and also thanked her for her advice, friendship and support to each one of them throughout her career.

We wish An M. Aingeal health and happiness as she moves to the next phase of her life. 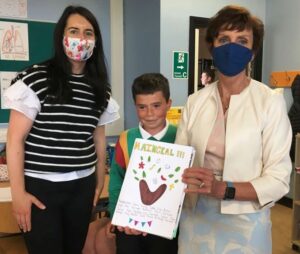